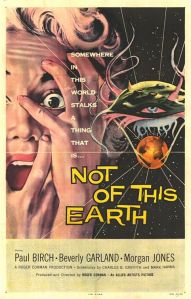 A Roger Corman Drive-In special. Before the Enterprise had a  matter transporter, the planet Davana had one of their own. Seems Earth isn’t the only place with nukes. Someone on Davana dropped the big one and an agent was sent to Southern California to get some blood for the leftover Davanians.

The agent calls himself Paul Johnson and moves in with a nurse and her servent. They start getting edgy when people come to the house but don’t leave. Even space vampires need some refreshment.

Paul Birch is very good as the alien. He played Captain Carpenter on “The Fugitive” 1963-64.  The nurse is Beverly Garland.  TV fans know her as Barbara Harper Douglas on “My Three Sons”, as Cookie LaRue on “Mary Hartman,Mary Hartman”, Dorothy “Dotty” West on “Scarecrow And Mrs. King” and as Estelle Reese on the soapie, “Port Charles.”

I'm a big fan of vintage books,movies,TV shows and music. I encourage everyone to patronize your local used book/record store and pick up some of the good stuff. My posts are capsule reviews of some favorites that you may want to investigate. The albums posted aren't really reviews but items from my collection that are still available. I try and point out highlights of each one and let the music speak for itself. Thanks to all for checking out the blog.
View all posts by vintage45 →
This entry was posted in Horror, Science Fiction, vintage TV and tagged Movies. Bookmark the permalink.