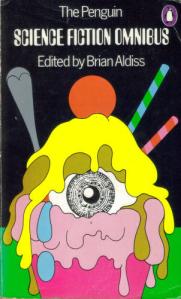 Favorites: “Skirmish”(1950)-Clifford D. Simak- Reporter Joe Crane’s watch is set an hour ahead. He sees a metal rat like object on his desk and throws something at it and it goes into a closet. His typewriter types a message for him to keep out of it. Then a call comes into the paper about a sewing machine rolling down the sidewalk with a mind of its own. Despite the warning from his typewriter, Joe investgates.

“Counterfeit” (1952)-Alan E. Nourse- After a boring mission on Venus the ship heads back to Earth. A Doctor can’t figure out why one of the crew is alive. He doesn’t have any blood sugar. Was there life on Venus after all and is it on the ship?

“An Alien Agony” (1962)-Harry Harrison- Trader John Garth is on Wesker’s World. He gets some unwelcome company as a ship drops off missionary Father Mark. The planet’s natives listen to him. Big mistake.

“Protected Species” (1951)- H.B. Fyfe- Earthmen are planning on a colonizing the planet Torang. There are ancient cities with ape like creatures hiding from them. Could they be the ancestors of the lost civilization that built the cities?

“The Cage” (1957)- A. Bertram Chandler- After landing, a ship explodes and strands the surviving crew and pasengers. When they think they’re on their own a net drops from a spaceship and takes six of them off and puts them in a cage.

“The Windows Of Heaven” (1956)- A man is finally landed on the Moon. Now the problem is, what’s wrong with the Sun?