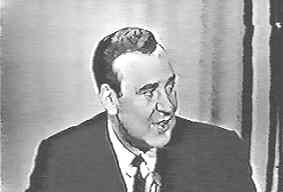 A remake of “People Will Talk (1963). Three panelists try to guess how a panel of nine celebrities will answer questions. Carl Reiner is the host. The show’s consultant was Dr.Joyce Brothers.

The questions this episode: “Do romantic screen heroes tend to make their wives dissatisfied at home?” They voted 2 yes and 7 no…….”Should A Woman Marry A Man Ten Years Younger Than She?” It was 4 yes and 5 no.

For the last question the panelists had to guess how the majority voted. “Should the United States government subsidize children as they do in France?” Turned out 8 no and 1 yes.

I'm a big fan of vintage books,movies,TV shows and music. I encourage everyone to patronize your local used book/record store and pick up some of the good stuff. My posts are capsule reviews of some favorites that you may want to investigate. The albums posted aren't really reviews but items from my collection that are still available. I try and point out highlights of each one and let the music speak for itself. Thanks to all for checking out the blog.
View all posts by vintage45 →
This entry was posted in TV-Game Shows, vintage TV and tagged TV. Bookmark the permalink.