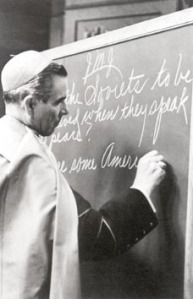 Half-hour show in which Bishop Fulton J. Sheen delivers, depending on how you look at it, a lecture or a routine. He mixes in some of the corniest jokes you’ll ever hear while talking about the topic of the week. He milks the audience for applause and laughs and they can’t get enough of him.

This episodes’ topic is “Angels.” Along the way he mentions the spiritless Soviet Union where all they care about is science. Sheen talks about the blandness of modern architecture and gives the UN building as an example.

He mentions how there’s no courtesty anymore….kind of like now. He says kids don’t have a spiritual world. Their heroes are Captain Video and Superman.

Along the way he draws on the blackboard as he explains the origins of angels and what they mean in our modern world. He says everyone has a guardian angel. That’s how this half-hour goes. When I say corny jokes…example: “For a pedestrian, every year is leap year.”

Sheen was the Roman Catholic Auxillary Bishop of New York City. The typical show featured moral lessons and a lot of talk about the evils of the Soviet Union. The show was nominated for three Emmies, twice as Best Public Affairs Program and once as Best Cultural, Religious or Educational Program.

I'm a big fan of vintage books,movies,TV shows and music. I encourage everyone to patronize your local used book/record store and pick up some of the good stuff. My posts are capsule reviews of some favorites that you may want to investigate. The albums posted aren't really reviews but items from my collection that are still available. I try and point out highlights of each one and let the music speak for itself. Thanks to all for checking out the blog.
View all posts by vintage45 →
This entry was posted in TV-News-Info, vintage TV and tagged TV. Bookmark the permalink.