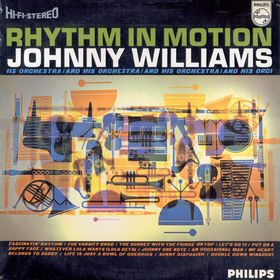 Before he put on a tux, called himself John and made a few million he made some interesting albums. The best was the soundtrack to the 1960 TV show “Checkmate.” This one from a year later features tunes from the 20’s and 30’s done up in modern style. These are gimmicky arrangements that don’t always work but it’s a good representation of the early 60’s Big Band albums. It’s been paired with the “Checkmate” soundtrack to make for a good CD. “Rhythm In Motion” has twelve tracks.

Highlights include: “The Varsity Drag”, “Put On A Happy Face” and “Life Is Just A Bowl Of Cherries.”

I'm a big fan of vintage books,movies,TV shows and music. I encourage everyone to patronize your local used book/record store and pick up some of the good stuff. My posts are capsule reviews of some favorites that you may want to investigate. The albums posted aren't really reviews but items from my collection that are still available. I try and point out highlights of each one and let the music speak for itself. Thanks to all for checking out the blog.
View all posts by vintage45 →
This entry was posted in vintage music and tagged Music. Bookmark the permalink.