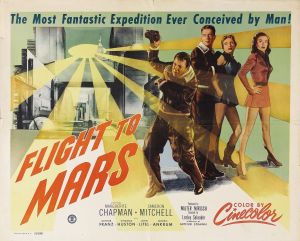 If you like your dumb SF movies in color instead of black and white then this one is for you. A group of character actors blast off to Mars and find other character actors. Interesting to note that Martian women dress like ice skaters. This one is really from the bottom of the barrel.

Reporter Steve Abott (Cameron Mitchell) joins scientists Dr.Jim Barker (Arthur Franz), Carol Stafford (Virginia Huston), Profesor Jackson (Richard Gaines) and Dr.Lane (John Litel) on a flight to Mars. What will they find and can they get back?

On the way a meteor storm knocks out their landing gear. They slam into a mountain and cause an avalanche. Snow covers the front of the ship. Good thing there’s a back door. They see massive structures and then….Martians. They’re each wearing a different color space suit.

Their leader Ikkron (Morris Ankrum) invites them to their underground city. By the way, they speak English thanks to our radio broadcasts. No one speaks like a disc jockey or even Lum and Abner.

Everything is so friendly and the first thing Carol wants to know is, “Where’s the kitchen?” The crew doesn’t know it but Mars is running out of Corium and that’ll end life on the planet. Ikron plans to let them repair the ship so they can steal it. The plan is to send armies to Earth and take over the planet.

Carol has always had a thing for Jim. He’s not paying attention. Steve tries to wise her up that that road leads nowhere…just like this movie. Jim falls for Alita (Marguerite Chapman). The dumbness continues until this thing finally comes to an end.

Cameron Mitchell appeared in dozens of TV shows and movies. He played Jeremiah Worth in “Swiss Family Robinson” (1975-76) and Buck Cannon in “The High Chaparral” (1967-71). 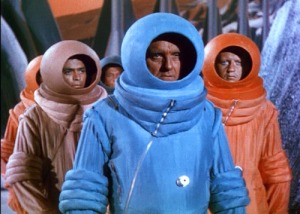 I'm a big fan of vintage books,movies,TV shows and music. I encourage everyone to patronize your local used book/record store and pick up some of the good stuff. My posts are capsule reviews of some favorites that you may want to investigate. The albums posted aren't really reviews but items from my collection that are still available. I try and point out highlights of each one and let the music speak for itself. Thanks to all for checking out the blog.
View all posts by vintage45 →
This entry was posted in Science Fiction, vintage movies and tagged Movies. Bookmark the permalink.