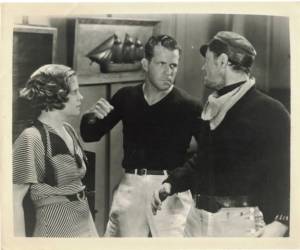 A jealous husband takes his wife and their best friend on a cruise. Now why would he want the man he’s jealous of along for the ride? Meanwhile Captain Gorilla Larson is set to sail to the South Seas. Their paths will cross in this bore-a-thon that features some abysmal acting…and the writing isn’t much better.

Philip Welles (Wheeler Oakman) is jealous of his wife Helen (Vera Reynolds) and their best friend Dave (Reed Howes). He keeps throwing them together. One night Phil invites Dave to dinner and then leaves the room pretending he has some pressing work.

Helen explains to Dave what’s going on. Then she discovers Phil pretending to be asleep in a chair. Phil suggests the three of them  jump on his yacht and sail to wherever they feel like. He thinks they should get away from the pressures of business and just have a good time.

The scene switches to a ship loading up to set sail. It’s Captain is Gorilla Larson (Ralph Ince). He lives up to his name. Out on the ocean they spot a man in a boat and pick him up. It’s Phil. He says his boat had an explosion and his wife and friend were killed.

Wreckage is spotted. It’s actually Helen and Dave. Both are out cold in the cold and they’re brought aboard. Gorilla carries Helen to his cabin. His mate discovers a box of jewels Helen had on her. Gorilla keeps them for himself. He digs Helen and orders his mate to keep Dave keep of the way.

Phil demands he be taken back to San Pedro. That doesn’t go over so well and Gorilla says he’ll have to work for his passage to the South Seas. Helen is feeling better and Gorilla decides to make some moves. There’s trouble a brewin’. It’s discovered that Phil set up the explosion to try and kill Helen and Dave.

The movie takes a plot turn that may or may not be possible. Meanwhile Phil is trying to stir up a mutiny. The movie isn’t anything to go out of the way for. If you miss it you won’t be missing a thing.

Along with acting Ralph Ince directed dozens of movies from 1911-37.

Reed Howes made a lot of B wetserns and appeared in a number of TV episodes including on “The Gene Autry Show”, “The Life And Legend Of Wyatt Earp” and “Mister Ed.”

Wheeler Oakman started  in the silents in 1912 and appeared in dozens of movies until 1948.

I'm a big fan of vintage books,movies,TV shows and music. I encourage everyone to patronize your local used book/record store and pick up some of the good stuff. My posts are capsule reviews of some favorites that you may want to investigate. The albums posted aren't really reviews but items from my collection that are still available. I try and point out highlights of each one and let the music speak for itself. Thanks to all for checking out the blog.
View all posts by vintage45 →
This entry was posted in Drama, vintage movies and tagged Movies. Bookmark the permalink.