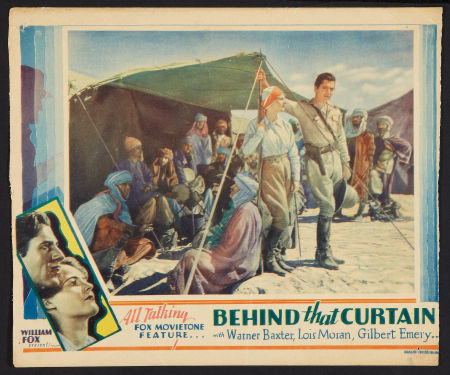 A Charlie Chan movie virtually without Charlie. The character doesn’t show up until the last twelve minutes. It’s only a brief appearance. The actors seem not to have a clue about how to read a script for a talkie. They do their lines almost word for word with no expression and no pacing. One bit of interest is Boris Karloff. He plays an Indian servant in a few brief appearances. The movie is one of the few actually based on a book by Charlie’s creator Earl Derr Biggers. The is only the third movie with the Charlie Chan name.

Explorer Colonel John Beetham (Warner Baxter) is trying to get some forged letters back from investigator Hilary Gault. He warns him not to use them. That night the porter in Gault’s building, Alf Pornick, sees a man searching the office with Gault’s body on the floor.

At Sir George Mannering’s, his niece Eve (Lois Moran) is talking with her childhood friend Beetham. Her fiance Eric Durand shows up. Sir George can’t stand him and has heard that he’s a womanizer and all around bad guy. He’d rather Beetham marry Eve.

Sir George is waiting for a phone call from Gault with info on Eric. Eve drops it on him that they were married the night before. He calls Gault’s office and Sir Frederick Bruce of Scotland Yard tells him Gault’s been murdered.

The only clue they have is a pair of Chinese slippers that were presented to Beetham by the Emperor of China. Bruce gets the lowdown on the slippers via a telegram from Charlie Chan. Eve and Eric leave for India.

Some time later in India Eve wants to have a life but Eric would rather stay home and fool around with Nuna the servant girl. In town Eve is picking up a letter where she spots Beetham. He’s leaving on a four month trek through the desert to Tehran.

Back home Eve finds evidence that Eric and Nuna have been having a good time. She opens her letter. It’s from Pornick. He’s been blackmailing Eric and he wants more money. She confronts Eric. She promises she’ll never say anything. Then she hooks up with Beetham and heads out to the desert with him. Eric thinks she’s just disappeared.

To Eric’s surprise Bruce drops by. He says he has some questions for Beetham and wants Eric to accompany him on a plane to Beetham’s caravan. He knows Eve is there.

In a long, very long corny and overly melodramatic scene Beetham and Eve tell each other how they really feel about each other. She says she can’t divorce Eric and refuses to tell him why. Now the plane lands. Beetham tells his manservant (Boris Karloff) to show Bruce and company around the camp while Eve hides in his tent. They don’t find her and leave. Then Beetham discovers that she’s missing. She hopped on a horse and took off.

A year later Eve is on a ferry in San Francisco and sees an item in the paper that Beetham will be in town that night to do a lecture on the Persian desert. She goes to her job as an elevator operator. The car clears out. One passenger left. Eric. He demands Pornick’s letter. He says he’s taken care of him and if she doesn’t give him the letter…she’ll meet the same fate.

Even though he’s barely on screen, Charlie Chan (E.LPark) has a lot to do with the end.

The movie is a bore and not worth wasting time on.

This is the only movie E.L.Park ever made and he’s the last person who is actually of Asian decent to play Chan.

I'm a big fan of vintage books,movies,TV shows and music. I encourage everyone to patronize your local used book/record store and pick up some of the good stuff. My posts are capsule reviews of some favorites that you may want to investigate. The albums posted aren't really reviews but items from my collection that are still available. I try and point out highlights of each one and let the music speak for itself. Thanks to all for checking out the blog.
View all posts by vintage45 →
This entry was posted in Charlie Chan, Crime-Mystery-Spy, vintage movies and tagged Movies. Bookmark the permalink.