Despite lame looking creatures it’s not a bad horror movie. Lab created life is running amok on an island off the Irish coast.

Dr.Phillips has a lab in the basement of his home on a remote part of an island. He thinks he’s found the cure for cancer.

Farmer Ian Bellows hears some strange noises from inside a cave and investigates. That’s all for Ian. His wife tells constable Harris he’s mising. Harris finds what’s left of him. His bones are gone.

Realizing how serious this is West knows he has to investigate. Toni just happens to have a rich father with a helicopter. The pilot flies the four to the island and will be back in a few days. They go to Dr.Philips lab and discover more bodies including Philips. They grab his notes and go back to the Inn.

Constable Harris goes to the house to look for them. In the basement he’s attacked and killed. The three doctors go back to the lab and discover Harris’ body. Then the creature appear. Dr.Landers takes an axe to it. It doesn’t penetrate. That’s the end of Landers. The creature divides and becomes inert. That allows the others to escape.

They’re all over the woods. Bullets won’t slow them down. Petrol bombs have no effect and even dynamite is a joke. West and Stanley get an idea. They go back to the lab. That has quite a cost for Stanley.

Their idea involves shooting radiation into the cattle. When the creatures feed on them that should do it. Right? The residents are all gathered inside the meeting hall. They start to panic when the lights go out. The place is surrounded. Will anyone survive?

This is worth seeing if you’re in the mood for a good little horror flick with some top pros that play it straight. 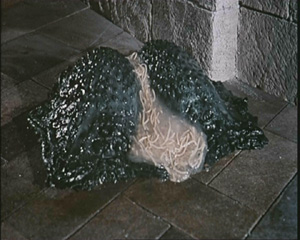 When it wakes up…look out!

I'm a big fan of vintage books,movies,TV shows and music. I encourage everyone to patronize your local used book/record store and pick up some of the good stuff. My posts are capsule reviews of some favorites that you may want to investigate. The albums posted aren't really reviews but items from my collection that are still available. I try and point out highlights of each one and let the music speak for itself. Thanks to all for checking out the blog.
View all posts by vintage45 →
This entry was posted in British Movies, Horror, vintage movies and tagged Movies. Bookmark the permalink.