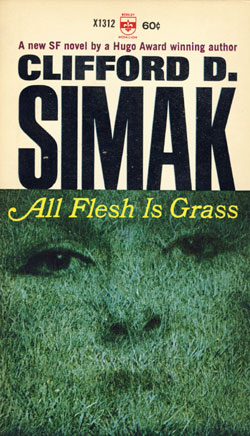 The midwestern town of Millvillie is surrounded by a barrier.

Brad Carter couldn’t make a go of his late fathers’ greenhouse business and is just about to shut down his failed real estate agency. His phone has already been disconnected. When he walks into his office a phone he never saw before rings. He hears three different voices telling him to go see Gerald Sherwood. He’s a rich man and also the father of Brad’s high school sweetheart Nancy. That day he’s also to meet with an old friend Alf who came back to town on vacation. They’ll do some fishing. Alf will explain his strange job. You just sit in a room and concentrate on a given problem.

Driving along Brad slams into a barrier that elastic enough that he’s not hurt and a tractor trailer speeds by and hits it. No one is hurt but the town is cut in half. Even the town garbage mans’ house has the barrier in the middle of it. Walking around Brad runs into Tupper Tyler’s mother. He disappeared ten years ago into a field of purple flowers. Tupper isn’t very bright and it’s thought he just wandered off and will never come back.

At Sherwood’s he runs into Nancy who came back to town to write a book. Sherwood also has one of those phones. He says he made his money by ideas that just came to him while he was on the brink of financial ruin. One of them was the constructing of the special phones. He doesn’t know how that happened. He gives Brad an envelope with fifteen hundred dollars to do a job he says his other self told him to.

Things get even stranger when all of a sudden Tupper appears near Brad’s house and talking about purple flowers which almost every one has in their gardens. Brad’s father was the first to discover them and plant them. Before the doctor can get there Tupper disappears again. The barrier starts to move and then there’s a storm. It’s not rain, it’s seeds.

Later on Brad walks through his garden right into an alternate Earth. There’s Tupper enjoying himself. Through him Brad talks with the voice of the alien flowers. They say there are millions of alternate Earths just a tick of time from each other. They want to come into Brad’s world and work with humanity.

While exploring, Brad spots a couple skulls and then some strange creatures watching what looks like a basketball. On it are scenes of a town being destroyed by nukes. That seems to amuse the creatures.

Brad gets back to his world with the basketball device. Life is about to get very nasty for him as the townspeople blame the barrier on him.

It’s easy to tell this was written in the 60’s when a number of issues Simak writes about were hot button topics at the time. Still this is not dated and can be enjoyed now just as it was then.