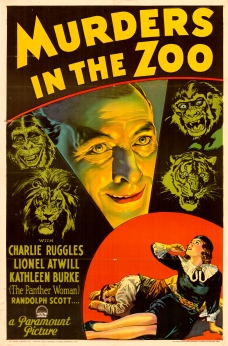 Interesting cast featuring Lionel Atwill, Randolph Scott, Charles Ruggles and Gail Patrick. Not a great movie but one worth watching.

Eric Gorman (Lionel Atwill) is in the Orient collecting animals for the Municipal Zoo. One of the members of the group tried to kiss Gorman’s wife Evelyn. Gorman sews his mouth closed and tigers did the rest.

Back home the Zoo is in financial difficulty. The head of the Zoo, Professor Evans, hires press agent Peter Yates (Charles Ruggles). He’s very nervous around animals. His big idea is to invite potential donors to a banquet at the Zoo’s Carnivore House.  They can dine surrounded by lions, tigers and the latest addition, an eight foot poisonous green Mamba.

Gorman goes to the apartment of family friend Roger Hewitt (John Lodge). Evelyn is there. She and Roger plan to get married after she files for divorce. When Gorman is announced he tells Evelyn to hide in another room. Gorman spots evidence that she’s been there. He invites Roger to the banquet.

There’s some comedy relief from Yates at the banquet. Then, Roger keels over. He’s been bitten by the snake and dies. Gorman blames scientist Dr.Jack Woodford (Randolph Scott) for letting the snake escape. Woodford was working on an anti toxin for the snake’s venom. His lab assistant is Jerry Evans (Gail Patrick).

Back at the Gorman’s Evelyn finally tells him she thinks he killed Roger. She locks herself in her room and starts to pack. Out the window she spots Gorman hiding something in a desk drawer. It’s a snake head that when opened a pin coated with venom comes out. She knows it was the murder weapon.

While Gorman is banging on her door she gets the weapon and goes to the zoo. She wants to see Woodford so he can examine it. Gorman catches up with her. He takes the weapon from her and tosses her in the alligator pit.

The zoo is closed until the escaped snake can be found. Two little boys sneak in. Using a stick they fish a piece of a dress out of the alligator pit. Evans asks Gorman if her can identify it. Gorman blames Woodford and says he’ll take him to court.

It all leads to an interesting, fast paced ending. It’s worth checking out if only for the cast.

After making a number of movies where she was the tough babe Gail Patrick spent her later years as Executive Producer of TV’s “Perry Mason” show (1957-66).

John Lodge left acting for politics. In 1951 he was elected Governor of Connecticut. He lost his second bid in 1954 and was appointed U.S.Ambassador to Spain. He stayed in that job from 1955-61.