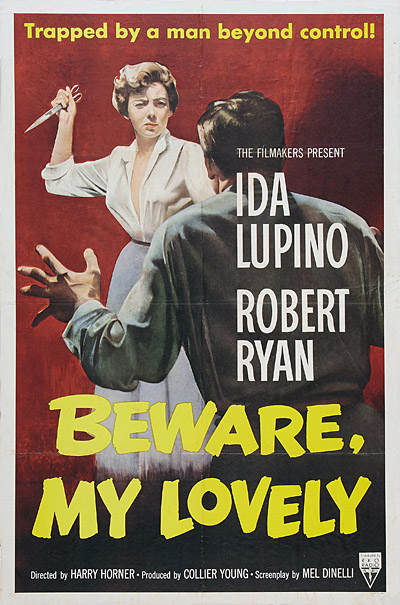 Robert Ryan is a psycho hired by widow Ida Lupino as a handyman. Although the movie wears thin it’s still worth seeing due to Ryan and Lupino’s acting.

It’s Christmas season 1918. Howard Wilton (Robert Ryan) is wrapping up his day of cleaning house. He calls out to his employer but she’s not answering, He opens a closet to put a mop away and there she is…dead. He runs out and hops a freight.

In a small town, war widow Helen Gordon (Ida Lupino)  is a school teacher and has a boarder in the house to help make ends meet. He’s leaving for a couple weeks and says a friend will be around to use the room while he’s gone. Her niece Ruth (Barbara Whiting) comes over on the orders of her mother to help Helen out for the day. She was out late the night before and now she has a lot to do. Helen gives her a lot of things to deliver around town.

In order to get the place together for the holiday Helen hires Howard on a whim. While he’s cleaning the floor Ruth comes back from making deliveries and talks a mile a minute to Howard. He’s not responding and she reacts by crumbling up potato chips on the floor and telling him what he’s doing isn’t a job for a man and then storms out. Howard locks all the doors.

He’s starting to act weird and Helen is getting frightened. He tells her he has blackouts and is angry that the army didn’t accept him. He’s getting worked up and she knows she’s in trouble. She tells him her roomer will be back that day so he can’t stay there.

It looks like she’ll get away with it but then the roomer’s friend comes by. Helen is upstairs looking for Howard’s coat. The man shows Howard a letter from his friend saying he can use the room while he’s away. Howard realizes Helen’s been lying. He tells the man the deal’s off and he’s taking the room. Now it’s just he and Helen in the house.

This would have worked better as part of one of the TV anthology shows that were popular at the time. At movie length it drags too much. Still, check it out for Ryan. He doesn’t overdo his part and is very effective because you never know what will set him off and when.