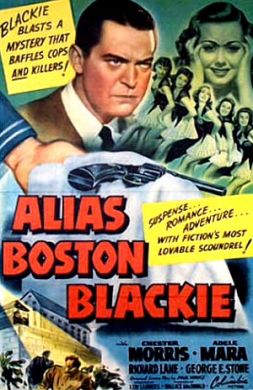 Third in the series starring Chester Morris as Blackie, George E.Stone as The Runt and Richard Lane as Inspector Faraday.

It’s Christmas Eve. Blackie’s arranged to take a theater troupe out to the prison to put on a show. One of the chorus girls is Eve Sanders (Adele Mara). Her brother Joe is in stir after being a driver in a robbery. He didn’t have a clue what was going to happen as he was double crossed by his pals Duke and Steve. Eve’s been to visit him twice and that’s all she’s allowed. Blackie tells her not to worry.

On the way up Inspector Faraday pulls the bus over and hitches a ride. (Look at the bus driver and you’ll recognize Lloyd Bridges in a non speaking part). At the prison a guard recognizes Eve but the warden doesn’t see any harm.

Joe (Larry Parks) is glad to see her. He’s also glad to see his old friend Roggi McKay. He’s in full clown makeup and tells Joe a job will be waiting for him when he gets out. It doesn’t mean much since that won’t be for thirteen years.

Blackie starts the show. Meanwhile Joe shows Roggi his special room the prison allows him to have since he directs the theatre. Joe pulls a gun and ties Roggi up and puts on the clown suit. Roggi is announced from the stage and he has to do an act. He’s not fooling Blackie. Joe gets away with it and rides back on the bus with Faraday sitting behind him.

Blackie finds Joe in Eve’s hotel room and tries to convince him not to kill Duke and Steve. They brawl and Joe gets the best of him and ties him after stealing his clothes. Blackie only has the clown suit to wear. Eve comes back and gets him loose. Blackie tells The Runt to call Jumbo Madigan the fence and get Duke’s address.

Faraday and Sgt Matthews show up at Blackie’s place to arrest him. They escape but Faraday watches them go so he can follow them. In Duke’s hotel room they discover his body. Joe charges in and gets mad when he sees Duke’s dead.

The cops arrive and bang on the door. Blackie hides Joe under the couch then later has him trade places with  Duke’s body. Blackie hides Joe in a fold out bed in a closet. Joe is under a sheet and the ambulance drivers take him out on a stretcher. Blackie finds a badge from a cab driver on the floor.  Faraday takes Blackie and The Runt to headquarters but they manage to escape. Blackie leads the cops on a wild chase.

He goes to Jumbo’s (Cy Kendall) and makes an interesting discovery. He and The Runt go to their friend, millionaire eccentric lawyer Arthur Manleder’s (Lloyd Corrigan) place where they arranged to have Joe hide out. Blackie has a plan to find Steve (Paul Fix) and wrap things up.

This was a fun movie and series fans will like it. For those that haven’t seen the series at all this is a good one to check out.

Paul Fix was a movie and TV staple for many years. His most famous TV role was as Marshal Micah Torrance on “The Rifleman” (1958-63).

I'm a big fan of vintage books,movies,TV shows and music. I encourage everyone to patronize your local used book/record store and pick up some of the good stuff. My posts are capsule reviews of some favorites that you may want to investigate. The albums posted aren't really reviews but items from my collection that are still available. I try and point out highlights of each one and let the music speak for itself. Thanks to all for checking out the blog.
View all posts by vintage45 →
This entry was posted in Boston Blackie, Comedy, Crime-Mystery-Spy, vintage movies and tagged Movies. Bookmark the permalink.