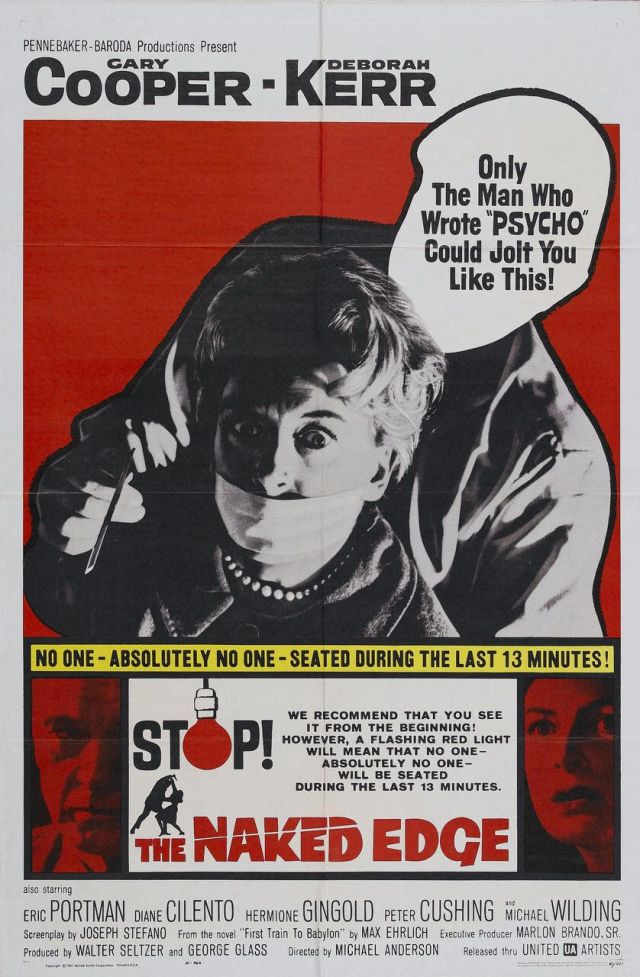 It’s based on Max Ehrlich’s book “Last Train To Babylon.”  The screenplay is by Joseph Stefano who took Robert Bloch’s “Psycho” and wrote that screenplay.The Executive Producer is Marlon Brando,Sr.  A woman can’t get rid of her suspicions that her husband is a murderer.

Donald Heath is convicted of killing his boss Jason Root. The testimony of fellow employee George Radcliffe (Gary Cooper) sinks him. George says he saw him run off carrying a bag full of money that was delivered that day. The cash is missing.

Outside by the river George is telling his wife Martha (Deborah Kerr) about the business he’s going into and points out the buildings where it’ll be. He says he got the investment money by gambling in the stock market.

George can’t help but notice that he was followed from the courtroom. He confronts the man who is disbarred lawyer Jeremy Clay (Eric Portman). He hints that he thinks George is the real killer.

Five years go by and George is very rich and successful. Martha comes to his office and points out the big story in the paper. A stolen mailbag has been recovered from a robbery after five years. Instead of money inside it was filled with letters. The post office delivered them. One was for George.

The letter said that George killed his boss. It’s from Jeremy Clay. That night they go to a restaurant and run in to their eccentric friend Lilly (Hermione Gingold). She senses there’s trouble between the two. On the way home George questions Martha about her suspicions. She tries to fluff it off but she’s not very convincing.

The next day George is going to Paris on business.  Lilly and Martha are out shopping when Lilly says she spots George in a taxi. Martha says he’s in Paris. It really is George. He’s trying to trace Clay and ends up in a book shop. He then takes a taxi to the airport, flies to Paris and phones Martha that evening.

As things trudge along Martha’s suspicions grow She goes to the morgue of the newspaper and reads an account of the trial. Donald testifies he’s an alcoholic and was there with a bottle he took from Root’s desk and then went to the boiler room. No one believes him and the lawyer asks if anyone thinks he’s innocent. His wife calls out a loud yes.

She visits Mrs.Heath (Diane Cilento). She now living in a rat infested dump with her daughter. She asks Mrs.Heath if her husband is guilty. She turns the tables and asks why George was sweating during the trial and says her husband was innocent. Martha leaves her a check but she runs after her and returns it.

While running through the apartment complex outside Martha runs right into George who takes her for a drive in the country. There’s a cheap attempt at suspense on top of a cliff overlooking the sea. Back home Martha looks through George’s papers and finds the book shop address of Clay and goes to see him.

The movie now tries for some Hitchcock type suspense but fails miserably. This is a case of read the book….skip the movie.

I'm a big fan of vintage books,movies,TV shows and music. I encourage everyone to patronize your local used book/record store and pick up some of the good stuff. My posts are capsule reviews of some favorites that you may want to investigate. The albums posted aren't really reviews but items from my collection that are still available. I try and point out highlights of each one and let the music speak for itself. Thanks to all for checking out the blog.
View all posts by vintage45 →
This entry was posted in British Movies, Crime-Mystery-Spy, vintage music and tagged Movies. Bookmark the permalink.