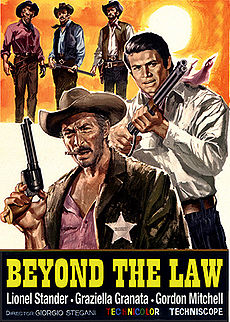 Another good spaghetti western with Lee Van Cleef. Three saddle tramps that live on robbery have their eyes on a hundred thousand dollars worth of silver. This is a good mix of comedy and action. The big surprise is Lionel Stander as Preacher, one of the thieves. Gordon Mitchell has a nice sense of menace as gang leader Burton.

Al flags down a stage for a ride. Passengers include Preacher (Lionel Stander) and Ben Novack (Antonio Sabato). Ben is delivering a payroll to the miners. Through a clever robbery where Ben doesn’t have a clue the money is gone Billy Joe Cudlip (Lee Van Cleef) picks up the money bag on the road and hides it behind some rocks.

In town Ben says the money was insured and will be replaced. The miners are about to get nasty when Cudlip rides in and shames them out of it. He and Ben become friends. Ben is from Europe and is getting his first taste of the West.

Ferguson is wounded and back in town he gives up his star to Cudlip. The bandit is now the new sheriff. Burton is angry at his gang and is determined to get his hands on a hundred thousand dollar shipment of silver. Federal agents are due in town to guard it so he has to get it before they show up.

Cudlip decides it’s time to leave town and Preacher and Al go with him. Inside an abandoned cabin they’re cooking up some stolen chicken when some of Burton’s boys show up. Big mistake as they end up on the wrong end of Cudlip and his pals.

In town five of Burton’s boys harass the lovely Sally when Ben shows up. It’s five against one. Ben uses martial arts to start taking care of them. One finally hits him over the head with a rifle. Rather than press their luck they leave.

The town is going to have a big festival. That’s when Burton chooses to strike. He and his gang ride in. You know there’s going to be trouble…big trouble. Now all comedy is dropped and things get real serious.

There are some changes to the usual spaghetti formula and this is one worth seeking out.

Lionel Stander appeared in dozens of movies and TV shows. He’s probably best known as Max in “Hart To Hart” (1979-84).

I'm a big fan of vintage books,movies,TV shows and music. I encourage everyone to patronize your local used book/record store and pick up some of the good stuff. My posts are capsule reviews of some favorites that you may want to investigate. The albums posted aren't really reviews but items from my collection that are still available. I try and point out highlights of each one and let the music speak for itself. Thanks to all for checking out the blog.
View all posts by vintage45 →
This entry was posted in Western and tagged Movies. Bookmark the permalink.