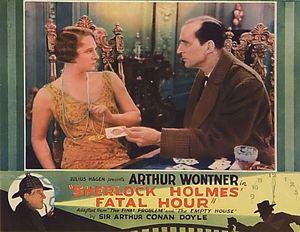 First of five movies starring Arthur Wontner as Sherlock Holmes and Ian Fleming as Dr.Watson. Minnie Rayner is Mrs.Hudson and Philip Hewland is Inspector Lestrade. The movie is based on two Doyle stories, “The Adventure Of The Empty House” and “The Final Problem.”

The Bank of England is robbed and the watchman killed. Switch to a card game at the home of brother and sister Kathleen and Ronald Adair. Some time ago the family trustee killed himself leaving them with almost nothing. Ronald has been supporting them by gambling. He has a habit of winning.

He’s winning again during a bridge game at the house. Marston the butler finds an ace of spades on the floor. Ronald says it belongs to a deck on another table. The game breaks up after millionaire Thomas Fisher has had it with losing. Dr.Watson stopped by at Kathleen’s request. She’s afraid Ronald is a card cheat.

Later she confronts Ronald and starts to say she’d put a bullet in his head if….then Marston walks in. At Baker Street Holmes tells Watson he’s on the case of the bank robbery. No money was stolen and a piece of brown paper was left behind. He thinks it’s the work of Professor Robert Moriarty. Watson never heard of him. Lestrade comes in and tells Sherlock he can’t blame every crime in London on this mythical figure. There was a similar robbery in Berlin and Holmes blames Moriarty for that one too.

Ronald received a message to meet a German diplomat. He’s blindfolded and taken to a room where the lights go out and the picture of a sleeping cardinal is illuminated. A voice tells him that he has to take a suitcase with him on his trip to Paris. Since he’s a diplomat his luggage won’t be searched. He refuses. The voice tells him if he doesn’t he’ll be exposed as a card cheat and then he’ll only have one way out. It’s in a box on the table. It’s a gun.

Moriarty sets it up for Watson and Mrs.Hudson to leave the house so he can see Holmes alone. Holmes had written a note to Watson to open in the taxi before he gets to his destination. It tells him the call he’s going on is a fake and to get back home.

Moriarty is in disguise. He tells Holmes he’s tired of his interference with him and his days are numbered. Watson comes back as Moriarty is leaving. Holmes deduces Watson gets his boots made at the same place as the professor. Holmes,Watson and Lestrade go to J.J.Godfrey’s shop. Before they get there a voice from the ceiling orders Godfrey not to hide the suitcase he just made.

When everyone shows up Lestrade searches the place and finds a printing press for counterfeit English bank notes and arrests Godfrey and his staff. Holmes finds a wire leading to the room above and finds Watson tied up and gagged.

Later on Marston finds Ronald dead of a bullet wound to the head. Holmes tells everyone he’ll have the murderer under lock and key in twenty-four hours.

This is a great series and Wonter and Fleming are a perfect team.

I'm a big fan of vintage books,movies,TV shows and music. I encourage everyone to patronize your local used book/record store and pick up some of the good stuff. My posts are capsule reviews of some favorites that you may want to investigate. The albums posted aren't really reviews but items from my collection that are still available. I try and point out highlights of each one and let the music speak for itself. Thanks to all for checking out the blog.
View all posts by vintage45 →
This entry was posted in British Movies, Crime-Mystery-Spy, Sherlock Holmes, vintage movies and tagged Movies. Bookmark the permalink.