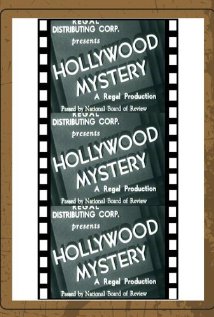 Mystery is a misnomer. This is actually a comedy about the making of a gangster picture and the stunts pulled by the PR man to get it across. Frank Albertson is fun to watch as PR man Danny Ryan.

The head of Supreme Pictures, Ben Vogel, hires foreign director Siegfried Sonoff who hasn’t done a thing to earn his salary. PR man Danny Ryan wants to get his girlfriend Doris Dawn (June Clyde) as a leading lady. Sonoff is directing a gangster picture called “The Racketeer.” He says he’s a realist and an artist and wants to do it his way. He refuses to put Doris in it. Danny has his work cut out for him.

He convinces Sonoff it would be a great idea to have a real gangster as the lead. Sonoff goes for it. Danny tells him to let Vogel know it was his own idea. Now to find a real gangster.

Danny, Doris and Sonoff go to a roadhouse where gangsters hang out. They spot Tony Capello across the room. Before Danny can send a waiter over to him to set up a meeting Tony starts a brawl by decking someone. Danny can’t talk to him now as Tony races outside and jumps in his car. Danny and company chase him to his home.

Inside Tony keeps refusing to star in the movie. Doris keeps giving him the eye and he accepts. Danny is the only one who knows Tony is a fake. He’s a ham actor Danny hired from back east to come out to Hollywood. It’s all a scam to get Doris in the movie.

The next day’s newspaper tells the story of the brawl. Turns out the man Tony slugged isn’t the one Danny had set up for the stunt. It was real gangster Joe Romano and the paper hints at a gang war. Nobody knows anything about Tony Capello.

Danny tells Ben the truth and says it’ll be great publicity for the picture. Reporters aren’t allowed near the set and no pictures of Tony are allowed. But one of the papers had an extra take a photo and put it on the front page. Now Danny has a dummy in an armored car keep going to Tony’s place while the real Tony stays in the studio.

The movie is finally finished. Before Danny can give the papers the real story Romano is tracking Tony down. This is worth spending time with but don’t expect a lost classic. It’s just an hour of early movie fun.

I'm a big fan of vintage books,movies,TV shows and music. I encourage everyone to patronize your local used book/record store and pick up some of the good stuff. My posts are capsule reviews of some favorites that you may want to investigate. The albums posted aren't really reviews but items from my collection that are still available. I try and point out highlights of each one and let the music speak for itself. Thanks to all for checking out the blog.
View all posts by vintage45 →
This entry was posted in Comedy, vintage movies and tagged Movies. Bookmark the permalink.