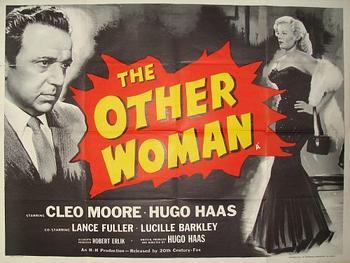 Lost gem of a B movie about a bit actress who feels humiliated by a director. She creates a scheme to blackmail mail him out of revenge.

Walter Darman (Hugo Haas) is a foreign born movie director. His father-in-law heads the studio and isn’t happy with his continental way of making movies. He doesn’t think they resonate with American audiences. Walter is currently doing a prison picture. On the set is Sherry Stewart (Cleo Moore) waiting for a break. She gets it when an extra can’t be available for a three line scene.

Sherry tries but can’t cut it. The women snicker and Walter uses his wife Lucille to do the part. Sherry is steamed and feels that Walter made a fool of her. Her boyfriend Ronnie tells her maybe she doesn’t have any talent. That doesn’t go over well. She tells him she has an idea for revenge.

That night Walter and Lucille have her father Charles and a few others over for some cocktails and movie talk. Sherry calls and tells Walter to meet her outside in her car. He barely remembers her but decides to see what she wants. She tells him a story that her cousin has a letter Walter wrote some years back that he wouldn’t want to come out. It could lead to blackmail. She says if she didn’t cooperate they’d beat her up.

Walter isn’t going for it and walks off. He sees a couple men jump in the car and she drives off. He calls the cops but when he hears his father-in-law talking about how bad publicity can ruin a studio he hangs up. Later on he gets Sherry’s number and calls to see if she’s okay. She says she got banged around and paid them off. He offers to repay her but she hangs up on him.

The next night she shows up at the wrap party for the movie. She flirts with Walter and stays behind after everyone leaves except Walter. She pretends to look for a girlfriend who was supposed to drive her home. Walter says he’ll take her. When she leaves the car Sherry hurries inside and puts a knockout drug into a bottle. Walter comes to the door with a pair of gloves she left in the car. He doesn’t know it was on purpose. Now her plan goes into effect.

The next morning Walter wakes up on her couch. Lucky for him Lucille was out of town that night. Unlucky for him Ronnie shows up. He says there’s no attachment between him and Sherry.  Later on Charles tells Walter the movie has to have some reediting. While they talk Ronnie shows up and makes sure Charles hears him tell Walter to call Sherry. Walter tells Charles she just a bit player looking for a break.

It’s not long before Sherry calls him and tells him to come over to her house. She demands fifty thousand bucks. Then the light dawns as Walter catches on that nothing happened the night he spent at her place. Walter says all he can get is sixteen thousand. She turns that down and finds out Walter’s movie will have a sneak preview that night. She hires some of Ronnie’s friends to disrupt it.

Charles has had it with him. Then things get even worse as Sherry calls Lucille and tells her to come to her house without explaining why. Walter’s butler innocently tells him about the call. Walter picks up the phone and hears the conversation. He’s now over the edge.

It all comes to a good ending and it’s one worth looking for.