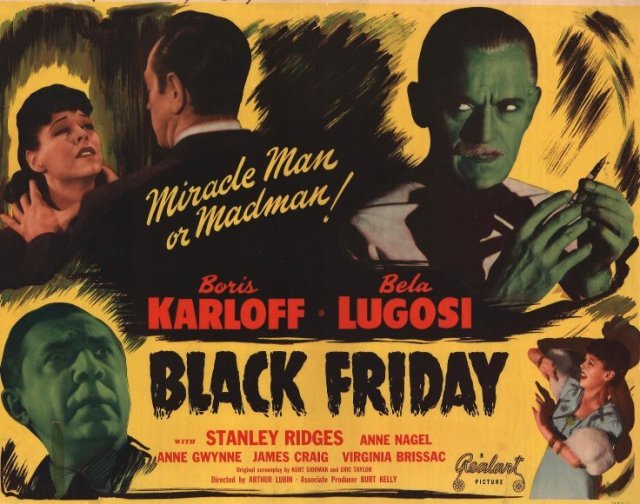 If you’re looking for another pairing of Bela and Boris…forget it. They’re both in this but don’t have any scenes together. The movie is just okay but I’m such a fan of the two I don’t care. It’s told via flashback. It opens in a prison where Dr.Ernest Sovac (Boris Karloff) is about to have a seat in the electric chair. Before he walks the last mile he gives a notebook to a reporter he says was fair to him. It contains the whole story.

English Lit professor George Kinsgsley (Stanley Ridges) is about to leave the small town of New Castle for an interview at a big university. Giving him a lift to the train station is Sovac along with Kingsley’s wife Margaret and Sovac’s daughter Jean (Anne Gwynne). Kingsley is cautioned about crossing the street. Two cars barely miss him as he’s not paying attention. All of a sudden two more cars come racing down the road. Gang leader Red Cannon is being chased and shot at by gang members under the direction of Eric Marney (Bela Lugosi). Kingsley is hit and Red crashes. It’s Friday the 13th.

In the hospital it looks like Red is done for and Kingsley has a bad concussion. Sovac saves him by transplanting some of Red’s brain cells into him. Kingsley is recovering at home but is having severe bouts of rage. Sovac reads that Red has a half million stashed somewhere. He wants it so he can continues his experiments. He takes Kingsley to New York and Red’s hotel room where he hid out for six months. He’s hoping the familiar settings will nudge the brain into revealing where the money is hidden.

Sovac takes him to a nightclub where Red’s girlfriend Sunny Rogers (Anna Nagel) is a singer. Kingsley gets a bad headache and Sovac takes him back to the hotel. The next day Kingsley wakes up and then turns into Red. Later he kills one of the four gangsters that was in the car that caused him to crash.

Sovac keeps asking him where the money is. Kingsley’s personality keeps going back and forth and Sovac never knows who he’s going to have to deal with. The situation is beyond his control. Gangster Bill Kane was always after Sunny.  Marnay orders him to go see her in her dressing room. He shows her a watch. He says he’ll give it to her…tonight.  No he won’t. While Kane is in his car Kingsley kills him. Sovac is watching.

Now as Red, Kingsley goes to Sunny’s place. She doesn’t know who he is but he knows his way around her place. He even gives her the watch Kane told her would be hers. Back at the hotel Margaret and Jean show up and Sovac tries to keep them away from Kingsley.

Things just get worse as Red waits in Marnay’s apartment. Two cops come in and Red plugs them and escapes with a bullet in his arm. He goes back to the hotel. Sovac can’t stop the women from seeing him. Trouble ahead.

This is not nearly as good as I hoped it would be but I’m always glad to see Bela and Boris. Even thought the movie is listed as horror, that’s debatable. Stanley Ridges gets kudos for his performance as the mild Kingsley and hard nosed Red. 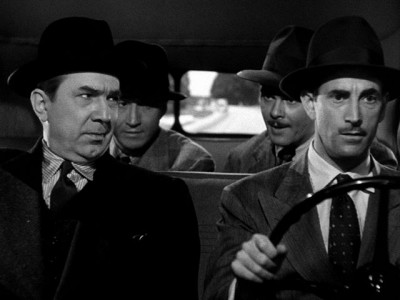 I'm a big fan of vintage books,movies,TV shows and music. I encourage everyone to patronize your local used book/record store and pick up some of the good stuff. My posts are capsule reviews of some favorites that you may want to investigate. The albums posted aren't really reviews but items from my collection that are still available. I try and point out highlights of each one and let the music speak for itself. Thanks to all for checking out the blog.
View all posts by vintage45 →
This entry was posted in Bela Lugosi, Crime-Mystery-Spy, Horror, vintage movies and tagged Movies. Bookmark the permalink.