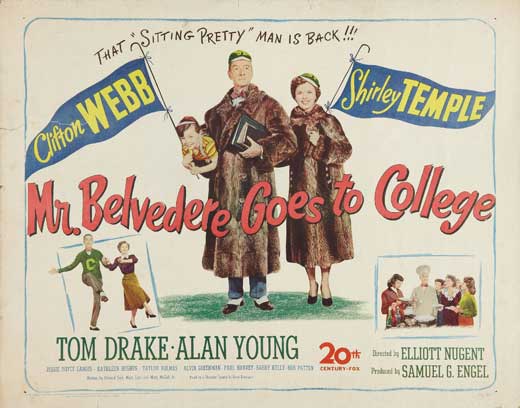 Clifton Webb reprises his role as the stuffy genius Lynn Belvedere. He played the part in 1948’s “Sitting Pretty.” Shirley Temple is a college senior and Alan “Wilbur Post” Young is a college sophomore. This is a fun movie that along with the comedy makes a point about judging people. Jeff Chandler has a bit part toward the end as a cop. Shirley Temple was twenty-one when she made this.

Mr.Belvedere is a successful novelist. His success brought a number of libel suits and he’s almost broke. He’s won an award that will get him ten thousand dollars. One requirement is that the winner must have a college education. He says he only spent two weeks in kindergarten. He says he’s a sell taught genius.

The president on Clemson college says he’ll admit him if he can pass the entrance exams. Belvedere says he’ll complete the four years in one., He sails through the tests and is now a student. His roommates are freshman Corny and sophomore Avery Brubaker (Alan Young). He’s a sophomore and says freshmen are the lowest form of life on campus and he’s going to make sure he follows campus traditions.

Belvedere has to get a job so he has some income. He goes to the employment office and meets Bill Chase (Tom Drake). Before he gets there he runs into Ellen Baker (Shirley Temple). She works for the school paper and wants to become a journalist. She wants to interview him for the paper but he turns her down. They’re both at the student employment bureau. Bill is more than interested in Ellen. There are only three jobs left. Belvedere takes one as a hasher at a sorority. He’ll have to wait tables and work with the cook.

Bill’s mother is the house mother for the girls. Belvedere gets along great with Marta the cook. Avery works there too so they’ll have to have peace between them. Bill introduces Ellen to his mother who thinks she’s from a rich family and wants the girls to rush her for membership. Belvedere takes over and gets the girls to stop being so sloppy and to follow rules.

It’s whisker week and freshmen are required to grow beards. Belvedere has to go before the sophomore council because he shaved. He’s sentenced to wear a false beard. Ellen is outside the window and takes a picture of him.  An article appears in the paper complete with quotes from Bevedere that aren’t complimentary to the college.

He goes to see Ellen and meets three year old Davy. Turns out he’s her son. He refuses to give her permission to write a story about him for a national magazine. Later it’s the freshmen versus the sophomores in an athletic competition. Belvedere wins it for the freshmen with a pole vault beating Avery.

Ellen invites Bill to her apartment and that’s when he finds out she’s a war widow. He has a tough time handling it and leaves in a hurry. There’s more crisis to come between Ellen and Bill’s mother and also Belvedere. This is a good one to catch up with and it features good performances from Webb, Temple,Drake and Young.

I'm a big fan of vintage books,movies,TV shows and music. I encourage everyone to patronize your local used book/record store and pick up some of the good stuff. My posts are capsule reviews of some favorites that you may want to investigate. The albums posted aren't really reviews but items from my collection that are still available. I try and point out highlights of each one and let the music speak for itself. Thanks to all for checking out the blog.
View all posts by vintage45 →
This entry was posted in Comedy, vintage movies and tagged Movies. Bookmark the permalink.