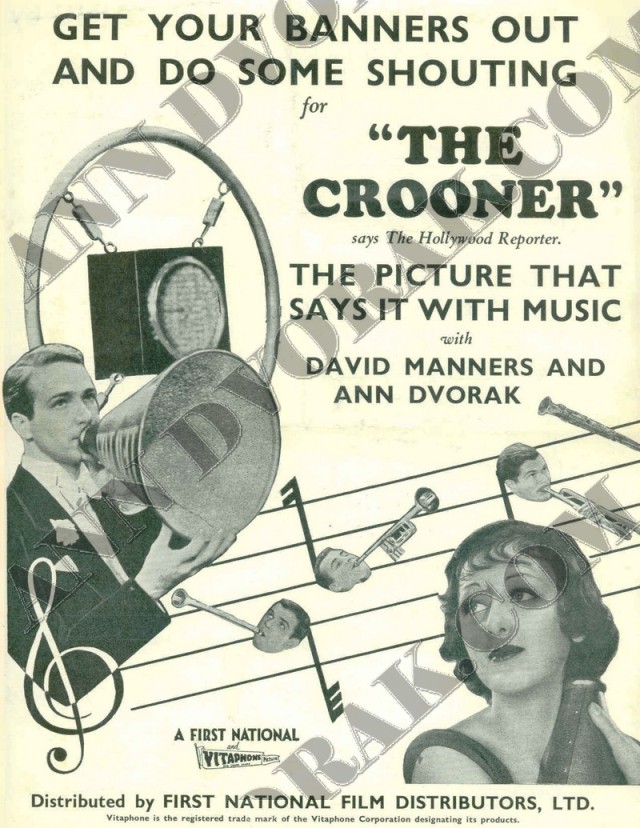 Story of a singer who finally hit it big thanks to a gimmick. It all goes to his head. The music is bland but there are parts where it’s supposed to be.

Ted Taylor (David Manners) leads a college band that now tries for professional gigs. Not much luck. They’re told they’re just average and novelty bands are the in thing. They finally get a job at a nightclub. Before going on the singer gets a sore throat. Club owner Nick Meyer (J.Carol Naish) demands someone sing. Ted sings real low hoping no one really hears him. A drunk hands him a megaphone and everything changes.

The men can’t stand his crooning but the dames all swoon. Ted’s girlfriend Judy (Ann Dvorak) brings in agent Peter Sturgis (Ken Murray). He stops Ted from signing a cheap contract with Nick. He finally signs for some good bucks.

It’s all starting to go to Ted’s head. He tells the band to play slower so the attention will be on his voice. The dancers aren’t happy. Sturgis gets him a shot on the radio. Letters pour in. Sturgis finally tells him most of them were faked by his staff.

Ted is getting worse. He hires a valet and then tells Judy he’s moving to the Waldorf. Then he hires a top vocal coach who wants to make him an opera singer. Ted demonstrates his stuff for Judy. She can’t believe how horrible he sounds. The coach tells him he’s wonderful and Ted believes him.

The blue bloods of Society want him to appear at their Deb parties and Ted keeps breaking dates with Judy to oblige. The papers are told he’s taking a week off to rest his voice at a mountain retreat. He’s really on a yacht with a dame. After a week she gets bored with him because all he talks about is himself.

When he gets back Judy shows him the paper. It’s all about the mountain sanatorium rest cure being a fake. She reads him the riot act and tells him she’s had it.

This is a pretty good comedy-drama even if the music is lame. It’s worth checking out for something a bit different. 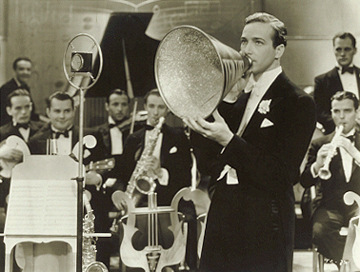 Ted Taylor (David Manners) hits it big with his megaphone

I'm a big fan of vintage books,movies,TV shows and music. I encourage everyone to patronize your local used book/record store and pick up some of the good stuff. My posts are capsule reviews of some favorites that you may want to investigate. The albums posted aren't really reviews but items from my collection that are still available. I try and point out highlights of each one and let the music speak for itself. Thanks to all for checking out the blog.
View all posts by vintage45 →
This entry was posted in Comedy, Drama, vintage music and tagged Movies. Bookmark the permalink.