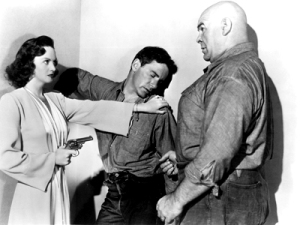 A few rewrites and maybe there would have been a decent B movie hiding in here. Richard Carlson is a P.I. who goes undercover into a sanitarium to find a crooked judge on the lam. Yes, Tor Johnson is one of the violent patients.

Ross Stewart (Richard Carlson) is just about to open his P.I. business. Waiting for him is newspaper reporter Kathy Lawrence (Lucille Bremer). There’s a ten thousand dollar reward out for Judge Finlay Drake. Kathy says he’s hiding out in the La Siesta Sanitarium. She knows because she trailed his girlfriend going out to visit him.

Her plan is for Ross to pretend he’s her out of work husband who is a maniac depressive. They get him commited and he’s put in a room with two other men. Dr.Porter (Thomas Browne Henry) runs the place. He’s assisted by sadistic attendent Larson (Douglas Fowley).

Fowley likes to go to the isolation ward and torment the Champ (Tor Johnson). Whenever Larson bangs the fire extinguisher with his keys the Champ thinks he’s in the ring and comes out ready to do battle. Good thing he’s locked up.

Ross changed his name and everyone thinks he’s a guy named Harry Horton. He has a tough time getting to the isolation ward where he figures the judge is hiding. One inmate is a firebug. Ross gives him some matches. He goes upstairs and starts a fire. Ross runs up to help put it out. That’s when he sees the judge.

Earlier Kathy brought him her picture. Under it is a shot of the judge. Now Ross is sure it’s the same guy. The judge tells Porter and Larson he doesn’t like the way “Horton” looked at him. Porter is beginning to panic. The three come up with an idea to take care of him. It involves the Champ.

One thing that spoils this movie is the idiotic dialogue between Carlson and Bremer. It’s insultingly stupid. The movie runs an hour. That’s sixty minutes too long.

Lucille Bremer starred in a number of musicals but her career never took off.

Character actor Douglas Fowley appeared in a lot of movies and TV shows. In 1979 he played a character named Robert Redford in the series “Detective School.” 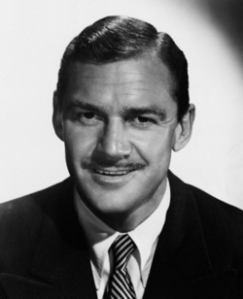